It feels like when I went on vacation the seasons decided to shift and it has been fall since I returned. It has been insanely dreary and grey outside and my office is freezing! It’s time to pull my cardigans out of storage in the basement (I pack them away in bins with lavender scented cedar wood blocks – smells heavenly when you open up the bin). And I need to get back into high gear and finish off my Flaum cardigan that I put on the back burner for just a short bit. I did realize that I had lots of little things to share that I’ve finished lately. 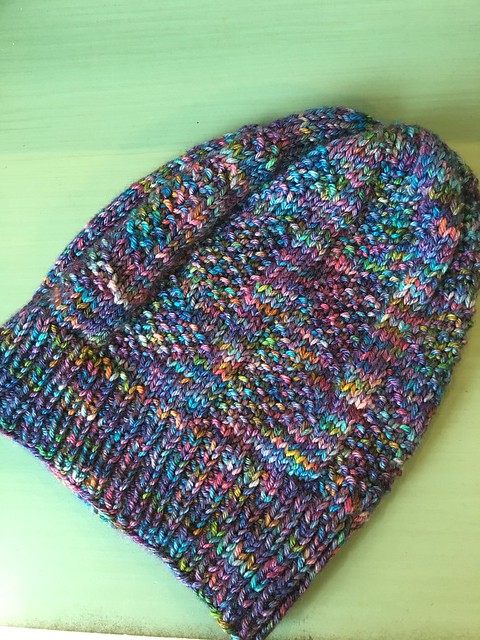 I mentioned I made my girlfriend Salina a hat and brought it with me to New Orleans. I whipped up the Dreiecke hat in a stashed skein of Madelinetosh Pashmina Worsted in Spectrum. She loves blues, purples and greens and I thought this was the perfect single skein to make a slouchy hat for her. The yarn is super dreamy, it’s a blend of wool, cashmere and silk so it’s light but still has warmth. I love this hat pattern and intend on making it in a solid color for myself so you can actually see the triangle pattern on it. 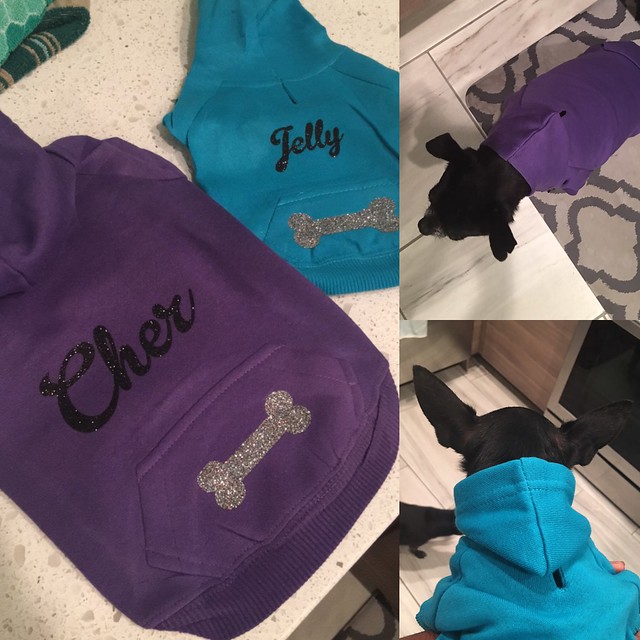 I also whipped up some custom hoodies for the dogs. Over the summer I bought a Silhouette Cameo 2 (the link is to the 3 – the new wireless bluetooth version), a DIY cutting machine that does a lot. I’ve also had an old school t shirt press for at least 10 years. So when the plain hoodies arrived I decided they needed a little embellishment and in about 20 minutes my idea was a reality. My husband of course thinks I’m silly and over the top but I like to give each dog their own signature color. It makes it easier to identify what belongs to which dog and my husband won’t attempt to put an XS on Cher when it’s meant for Jelly’s tiny butt. 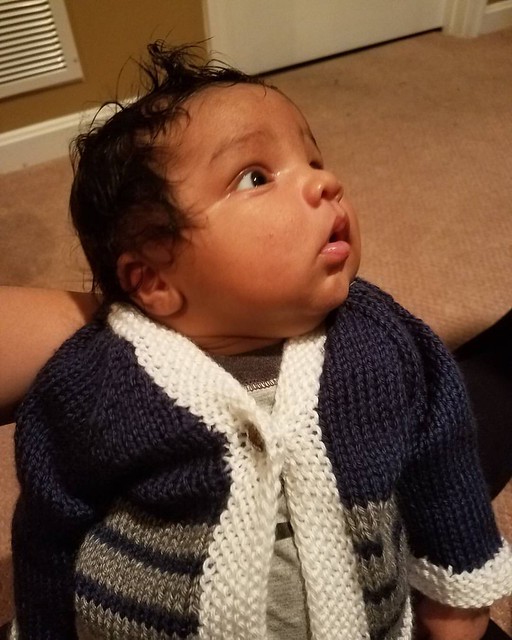 And an even cuter tiny thing to share – my girlfriend sent me a picture of her son Jaxon in the Cowboys themed sweater I knit him. When you’re knitting something for a baby before it has been born you marvel at how small it is and question if it could really fit someone and then it does! My favorite thing about giving a knit away is getting back a picture of someone wearing it. Fills me up with such joy.

Friday is my GRE day so cross your fingers for me and wish me luck, please! It’s step one in my quest to be a PhD student!!