I feel so accomplished because I have a bunch of finished object posts but really it’s just because I was holding off on sharing until after the holidays. But I did finish a sweater on January 1 and I’m finished with the body of another project that I hope to finish by Sunday. Sweaters are still flying off my needles in the new year. But with work getting busy for our huge trade show in a few weeks and spring semester starting next week (yikes!), I know my knitting progress might slow down just a tiny bit. 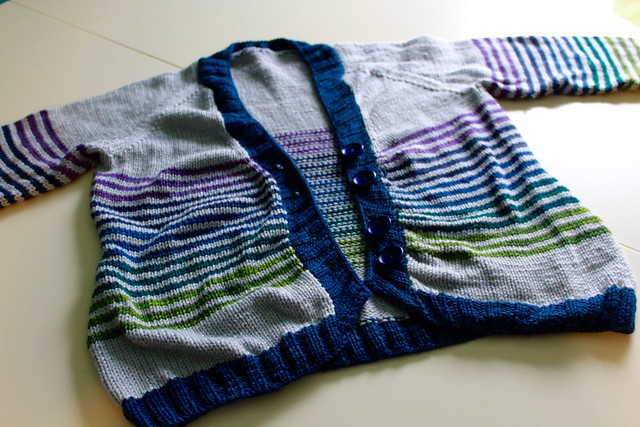 Does this look familiar? LOL Remember my custom cardigan I made for myself a few months back? Well when my sister Anne saw it she told me she wanted the same sweater but with navy blue border and buttons. Here’s the thing about people who don’t knit, they don’t understand sometimes how difficult something can be but because she’s my sister I figured out how to make it work. Here’s a pic of the original if you need a refresher. 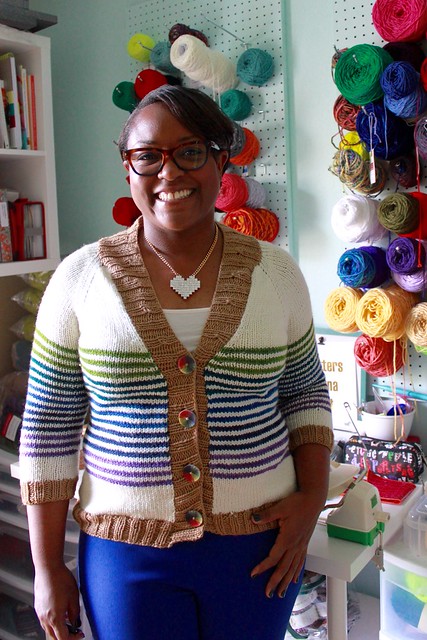 This was the first time I made up a pattern and I had some mistakes (I’m talking about you short rows on my collar), so I knew I would want to omit a few things from Anne’s pattern to make it a bit cleaner. I also needed to take better notes and that’s a shame because I have a pattern writing notebook my BFF gave me for my birthday but I just wrote insane notes all over my iPad Bamboo notebook that I later couldn’t figure out. LOL Oh well. I think I should’ve picked up a couple more stitches for the button band because it bunches just a tiny bit – but when you put it on you don’t notice. And on both versions of the cardigan it has a curved bottom…not by design. LOL BUT my sister liked it a lot. And since I didn’t want the cardigans to be exact matches, instead of doing an off white base of color, I picked up the pale grey/light blue Gloria yarn instead to go with the dark blue SweetGeorgia Superwash Worsted on the button band and edging. I like her more cool blue toned cardigan color palette a lot and this Manos Gloria yarn is just so soft and cozy. Perfect for this cold snap we’re having on the East Coast. 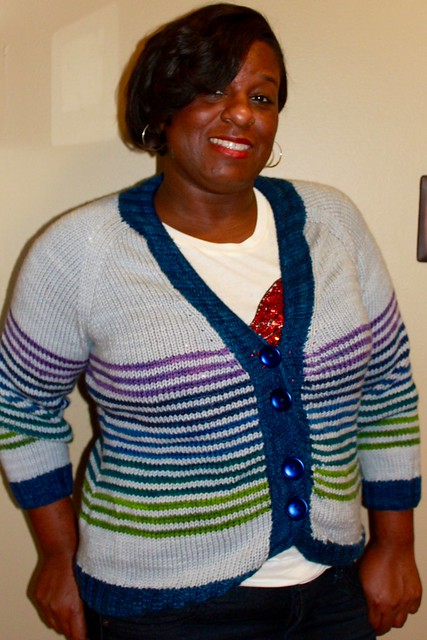 And here she is modeling her sweater on Christmas Eve. Not I just have another year to worry about what complex things my siblings will ask me to knit them for the next Christmas! LOL