I have a small circle of adults I’m willing to knit sweaters for in my life. My mom, my sisters, my husband, my BFF Jess and my cousin Safia are my main circle of people who will get hand knit sweaters from me and then of course most of the babies in my life. I have two other girlfriends I think of as sisters and one asked me in a random text if I’d be willing to knit her a Washington Redskins sweater. Well…I did. 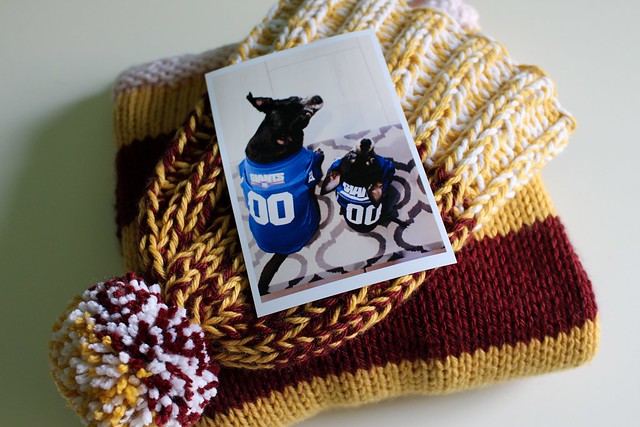 I have to preface the fact that because my house is a NY Giants household, I had to include a picture of Cher and Jelly in their Giants jerseys and require that my girlfriend Charmaine put that pic up in her home or office so people know where my heart belongs. I also made sure my husband was okay with me knitting in the burgundy and gold before I started, but because it was for Charmaine he gave it the green light. LOL And honestly I could’ve told him this was a Gryffindor sweater  and I think he would’ve been okay with that too. 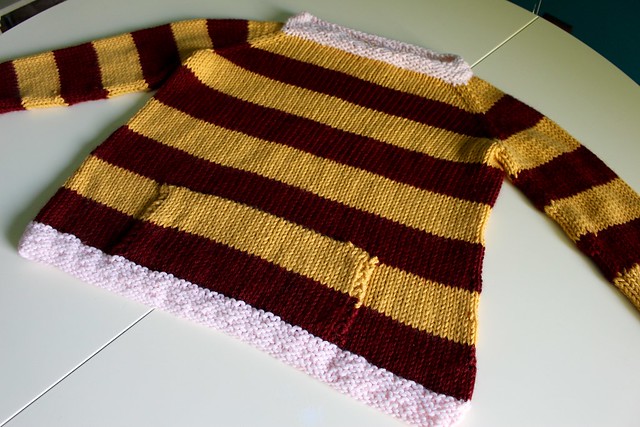 I decided to make the Montagne sweater for Char. It’s a bulky weight knit (you can see the one I previously knit here on Ravelry) that’s super simple and I knew I could make it over a few days. I also wanted a chance to make this sweater again because I have never been satisfied with how the pocket turned out on mine. In the instructions they have you cast on new stitches and then sew the pocked flap to the inside of the sweater and I hate that you can see the stitches. I never got it to lay nicely. For this version I decided to knit front and back over the 35 pocket stitches and on the next row I held the ones that looked like purls to the back (to keep working in the round) and held the ones that look like knit to the front on scrap yarn to work after I finished the body. Once I finished the body (20 rows – 10 gold, 10 burgundy) I went back, knit the front flap of the pocket and then knit those stitches back together on the last round. 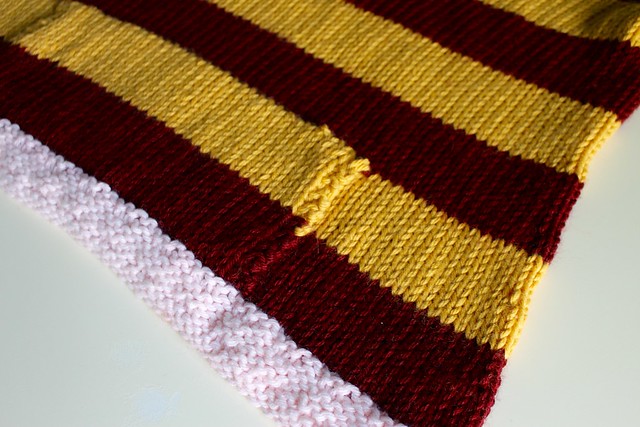 The end result was a much cleaner looking pocket and me being much happier with the end results. I also worked alternating 10 row stripes in the burgundy and gold, Berroco Vintage Chunky yarn. Unfortunately, the burgundy bled a little on the white collar and cuffs so it’s a very pale pink. I was worried it might make the yellow look orange but it held on to just the white and I was okay with it and Char could’ve cared less. She was just thrilled to have a new warm sweater in her team colors – she’s a season ticket holder and she’s going to the game in London this week and is taking it with her! 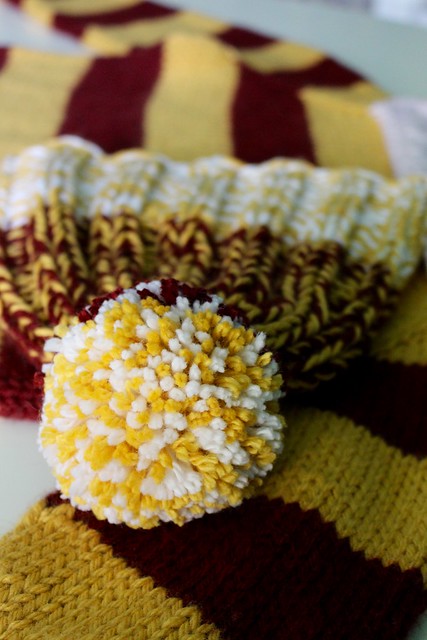 I also decided to whip up a hat because you can’t just have the sweater, right?! Plus I had just enough yarn to make the hat and the sweater. 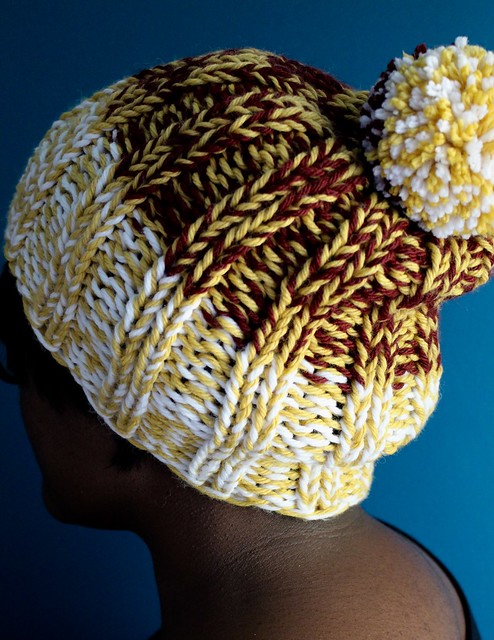 For the hat I knit the Lodge Toque from Within, the new Jane Richmond book. The hat is knit with two strands of bulky weight yarn on size 13 needles. I whipped this up in about 2 hours and used the last of the yarn to make a big fluffy pom pom on top. I didn’t tell Charmaine I was knitting her a sweater, I just knit it. I knit it in my size because she’s a little smaller but I knew it would fit or have some room to layer a tshirt underneath for when the games are really cold in November. And because it was our alma mater’s homecoming I was able to deliver it to her in person on Friday. The best knits are the ones that make people happy and this one definitely made her day. I’m happy I was able to put a smile on her face and I know whenever she wears either piece she’ll always think happily of me.

So what’s the best knit you’ve made as a gift? Share!

4 Replies to “FO: For Friends Who Love Football”