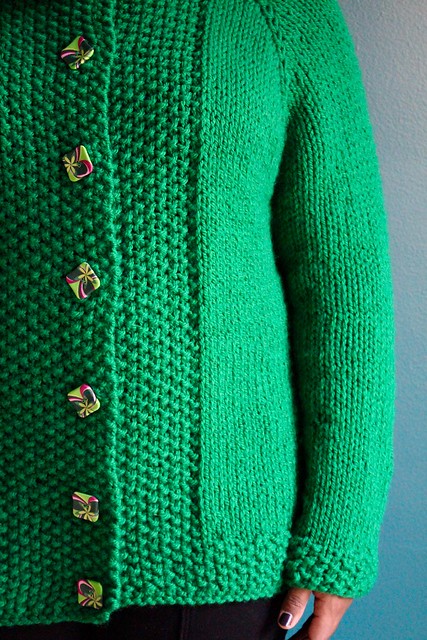 What do I do when I am home during a blizzard? Knit a jacket. Because my name is Dana and I’m an obsessive sweater knitter. They say all knitters have their “thing” that they love to knit and I thought my knitting thing was hats because I started knitting so I could make cool hats to fit my big head. But apparently my thing is sweater knitting! I never would’ve thought that would be what I love to knit but it’s true. I’m trying to pull together some of the lessons I’ve learned with sweater knitting so that if anyone else is intimidated like I used to be it might motivate them to give it a try. In the meantime, allow me to introduce you to Katrine. 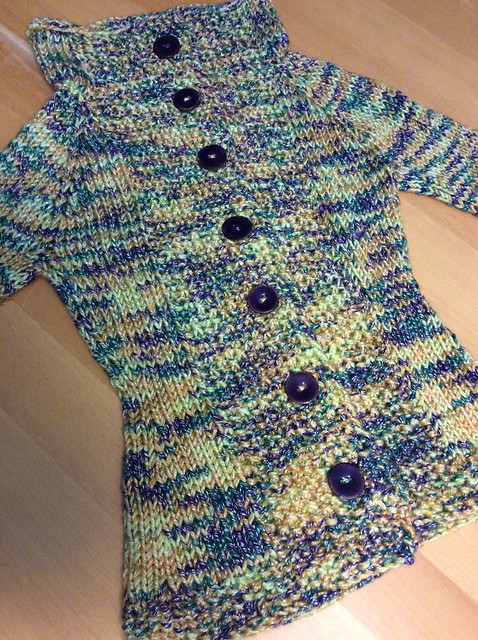 I originally knit this pattern in 2014 for my cousin Safia (the one in Chicago who is tiny and always in need of an extra layer). I surprised myself on the first one by figuring out my yarn wasn’t a true bulky weight and that I could double it up to achieve what I needed to for this pattern. I also think I spent more money on the buttons for her finished sweater than I did for all the yarn I bought on sale! But it’s definitely one of my earlier sweaters where I was still figuring out a lot of things and learned a lot. It wasn’t perfect but she loves it and sent me a picture in it the other day. That makes my heart sing – that’s why I like to give a knitted gift. 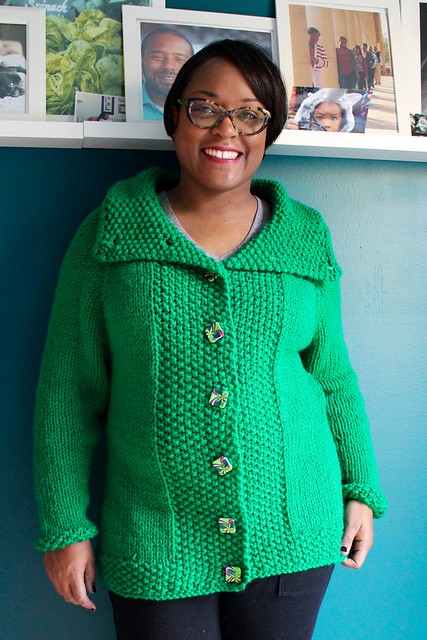 A couple of things I did differently this time around: 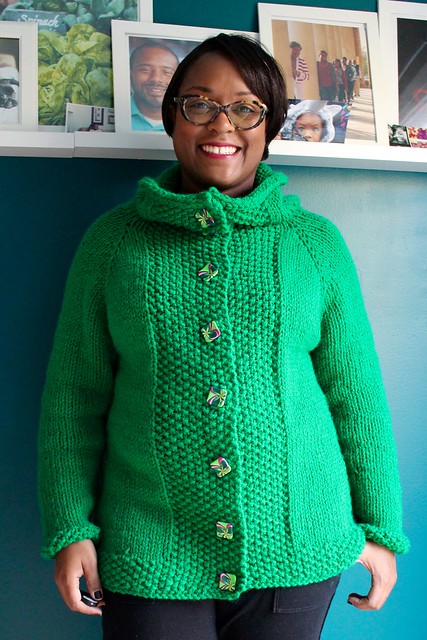 I actually have a Kelly green vest that I think this sweater will pair perfectly with when I want a bit more warmth. I can also wear this to work as a layer for those extra chilly days in my office. Oh and the buttons? My Joann’s has the best button selection in the world. I love it! They have never let me down. The buttons on this version and my cousins version were both purchased at Joann’s and picking buttons is probably my favorite part of finishing a cardigan. Oh and I finally gave in and bought myself a new camera. My DSLR was just giving me hell and now that I’ve bought the newer version I’m blown away at how much better my pictures are again. I love taking pictures and I realized I slowly had stopped taking real photos (instead of just grabbing my cell phone) because my camera was acting up so much. So hopefully I’ll be back to better photography of my knits here on the blog.

And if you have any sweater knitting tips to share, leave them in the comments and I’ll add them to my future post!